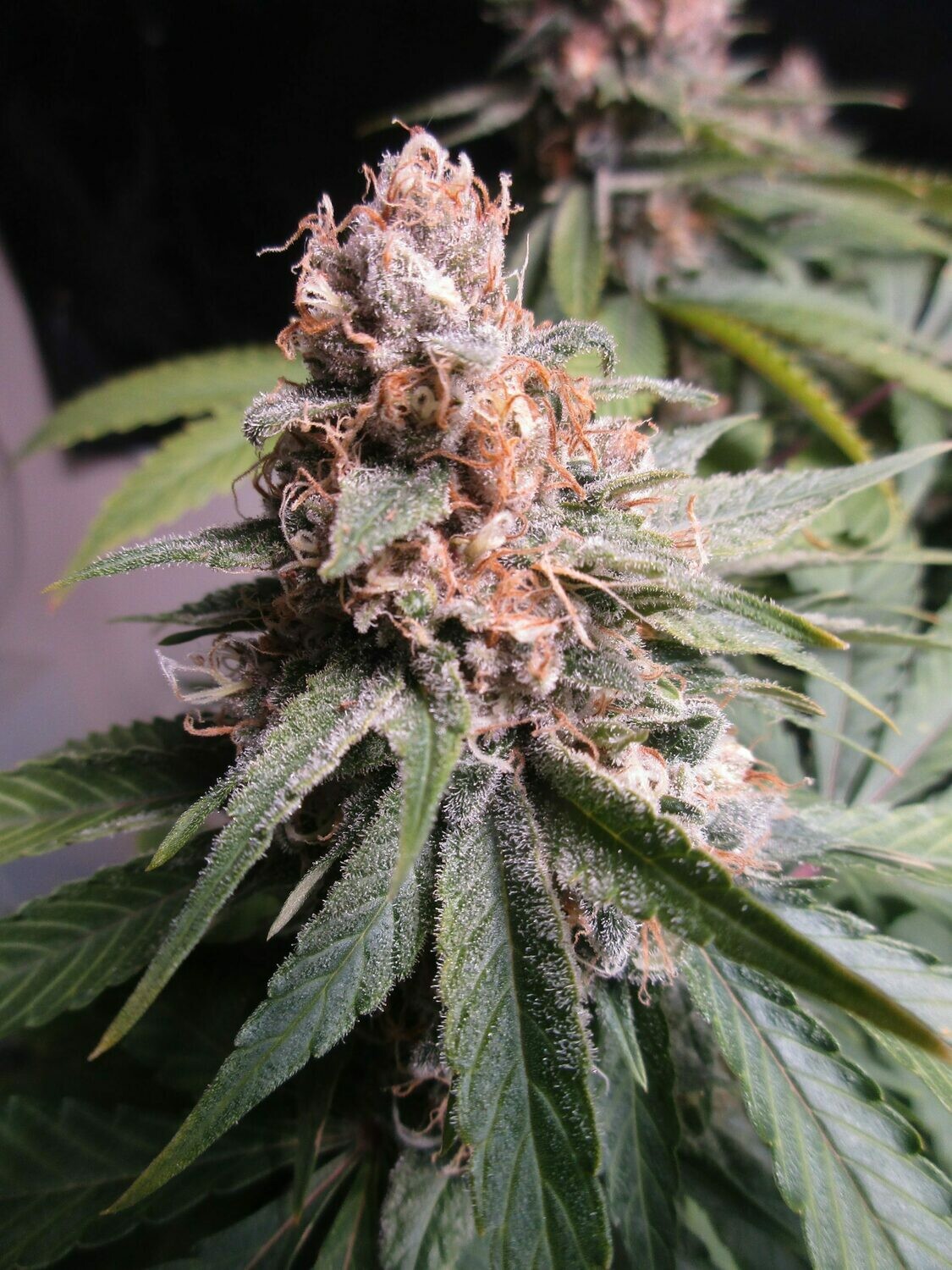 Mother: Our number 1 keeper cut of Strawberries n’ Cream (there were a few) is the true-female parent in this cross. This is our own Strawberries n’ Cream creation (not to be confused with Exotic Genetix Mikes’ Strawberries & Cream which both came out the same week). We named this cannabis seed variety only after we had fully finished trialing it, and the aroma it gave off was the main inspiration for its name. That, and the giant reddish colas she produced! We had a somewhat limited release which sold out quickly and are still asked about it today, so we thought it would only be smart to add this into one of our feminized crosses, especially considering how floriferous this plant really is. We are always suckers for bushy plants that spread out wide and far, and have 30 or so colas on the top in only a 7 gallon pot. We’ve all heard of the term, ‘The bigger the roots, the bigger the fruits!” Well, I came up with a new one after growing this plant and its, “The more branches, the better the chances!” Because typically with abundant branching comes a greater yield. Of all the high-yielding, monster plants we grow this one is right up there with the best of them, seriously.

White IX, the pollen-donor parent of this cross, was bred by Cannarado many years ago. We found this phenotype from seed 4 or 5 years ago ourselves and she’s been a garden stand-out ever since. The fact that we chose her for our very first feminized seed release says a lot! During our very first run though we weren’t quite sure about her because she seemed to grow kinda slow during the vegetative cycle and in flower too, but during weeks 6 through 9 she really put on quite the performance, more than compensating for the shortcomings we thought she might’ve had! Our bad. We were quick to judge and she showed us just how quick she can stack fat buds on those stocky branches of hers. The flowers continued to swell until they toppled over, paying no mind to the support stakes that were tied to them. The leaves generally remain dark green and canoe-upwards because of the resin-rails that encrust the edges of the leaves. The flowers are dense, heavy, and smothered in trichomes. And what about the aroma? She has a loud, deep, dank, pine-skunk, acetone nose… the one that so many folks are fond of. these days. The thing that is so special about her though is that unlike many OGs or Cookie varietals that grow tall and lanky, this lady keeps to herself, staying on the shorter, more compact side throughout her life, which we love. Her many highly desirable traits really shine through in this feminized cross, and others.

Floriferous magnificus is a term I made up somewhat recently and have been, again, waiting for the right time to use it. Much like ‘Lush as Fuck’, Floriferous Magnificus commands respect and is nothing to joke around about. The word floriferous literally means, ‘(a plant) producing many flowers’, and magnificus is latin for ‘magnificent’. This cross was the right fit for this name because when we’re talking about crossing the Strawberries n’ Cream monster to the White IX one, magnificent flowers in abundance are guaranteed!