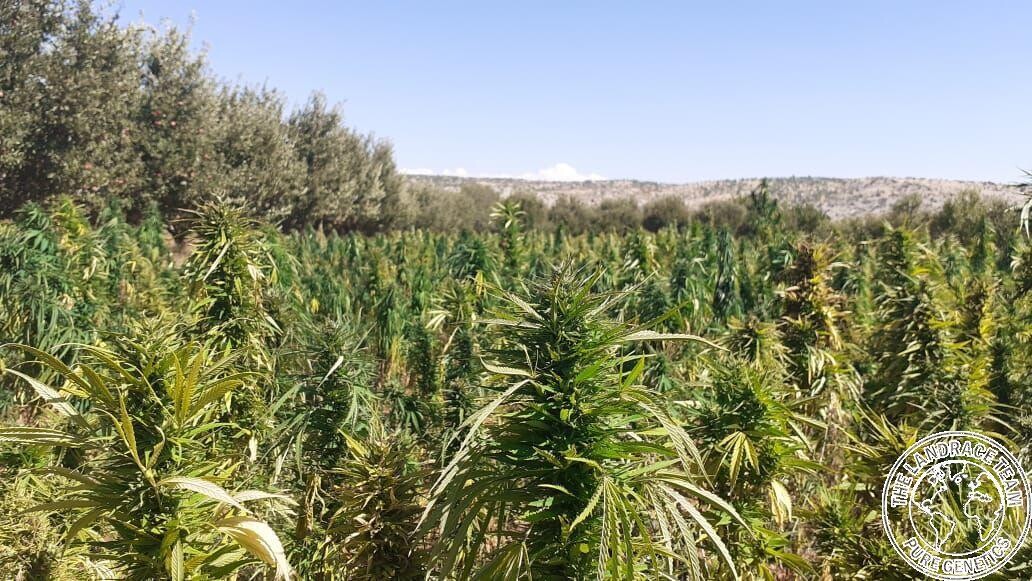 The trip to Lebanon was fantastic. Lebanon is a great country and up to few years ago it was called the Switzerland of the Middle East where lots of rich people would have their bank accounts… The food is of high standards, great quality, a perfect mix of Mediterranean and Middle Eastern cuisine. It is really really tasty. We had the pleasure to be hosted by wonderful people who happened to be part of a huge extended family who lives one of the most spectacular places in Lebanon, the Beqaa valley and the surrounding villages. All equally spectacular in their own respect. The weather too is perfect and conducive to cannabis cultivation.

The whole valley is served by rivers and lakes and also out of the Beqaa Valley there are numerous rivers and sources of water that make possible the growth of any vegetable and plants. The soil is in its majority of red clay nature, loamy and airy though. The sowing of the seeds happens normally in March, only this year, due to an unexpected snowfall around the end of April , farmers postponed the sowing until beginning of May. Some farmers living at lower altitudes were luckier and were not affected by this sudden snowfall therefore they started already in April.

However the villages up on the mountains were heavily affected by the snow and we witnessed more than one mountain pass shut by the military. This made us take different roads and what a bless t was. We also went to see another region of Lebanon: Mount Lebanon which is yet another marvel of this country. It is in the west of the country and is rich in mountains, forests, rivers, sea.

The Beqaa regions makes up for most of the agriculture of the country but Mount Lebanon has amazing and spectacular views, all very pristine and without much houses. Mind you, if you are thinking that Lebanon is an affordable country, you are far from the truth. It is one of the wealthiest countries in the whole Middle East without counting Saudi Arabia, Qatar and Kuwait. But life is far from cheap, the average salary is below European and American standards but the cost of living is the same as in Europe and the USA if not more expensive! Having said that we know how to live frugally and made the best of our time in this amazing country and we hope to visit it again some time soon.

Now let’s get down to the nitty-gritty details …. Below you will be able to read (in no particular order) all the info we have been able to collect during our stay talking with the locals. So what you’re going to read is what the people replied to our questions. We don’t claim to hold the truth, we only bring what the local farmers told us. No more no less. For privacy reasons we have taken out the bits concerning sensitive info.

There are 3 colours of this plant. Green , Yellow/Blonde and Red. Meaning 3 different phenotypes.
The best, in terms of effects (head high) are the green and yellow/blonde phenotypes. The red phenotype has a more calming, mellow, relaxing effect and if seeded can give you headache too.

When hashish (resin/powder) is not done just with flowers (habu = pure) It makes you sleep and gives you, likely, headaches. What they mean by “habu” or pure is the use of only and just the flowers and it’s only the first “beating” or shaking. That is habu.

There are two other types of soil: black and white. On these types of soil grow green and yellow plants and flowers. Both black and white soil are rather poor. The black one is more sandy whereas the white one is found more on the mountains and is also poor and thick.

There is a type of hash called Bakhoor. Bakhoor means incense. The possible reason why this type of hash is called Bakhoor Hash is that the most prominent smell it carries is that of incense which is a distinct feature present in most of the hash produced in the valley. A 10 ton press is used to make bricks from the powder/resin. The bricks get sent to various other countries in the Middle East.
1kg and 200gr is the standard measure used for weighing a brick of hash and it is called “Hooa”.

Plants grow from 0.5 metres (hash plants not watered) to 1.5 – 2 metres (watered) according to where they are grown (soil and location) and/or are watered daily or frequently.

For Red Lebanese, soil and terroir plays its role. It makes flowers red and the effects are felt more in the body. The green, blonde/yellow plants make your mind and all of yourself feel more happy and content.

The sowing season usually begins in March. The harvest seasons starts around the end of August until mid of September. It also depends on each and every plant and on how much sun exposure they get during the day. Effect s: happy and content
Smell/Aroma = light citrusy, earthy, incense, light lemon, cedar, apple, pine,

The Zahra Hash is the 2nd level of refinement, the second “beating” of the flower. Zahra means Flower whilst the Habu hash is the first or purest quality, the top quality with the biggest concentration of resin.

Plants not watered are considered wild and grow up to 50 cm they are called BAAALIYE , from Baal meaning wild. Hashish Baladi means local hashish, hashish produced and coming from Lebanon. Beled or Bled means country(side). Some plants are planted on mountains where there is no water. Those plants have a nicer effect. They are called hashish Baalia. Hashish is the word used for plants and grass equally. Plants that are watered, cultivated, farmed grow up to 1.5 – 2 metres. They have more of a spherical shape whereas the short ones, measuring generally 0.5 metres are more suited and used for industrial production of hash. The small plants grow with a main stem and few branches.

We spoke and were lucky to speak with a local botanist who knew, grew many different plants and trees and released them back into the wild. This is his recipe to make pure cannabis oil.

Oil extraction: use only heads, buds, tops and flowers from hash plants. Leave them soaked in pure 95% alcohol or higher in a glass jar. Even better if it’s organic alcohol.

Leave the glass jar in the sun for approximately 15 days or until it gets blonde. It can turn dark brown too. Afterwards open the jar and squeeze the alcohol out of the flowers and pour it back into the jar. Place the alcohol that is in the jar over low heat until you see that 50% of the alcohol evaporates. It must not be neither too liquid/watery nor too dense (like the tar). Let this liquid cool down. Afterwards you put it back in the sun always in the jar until the remaining alcohol evaporates. Let the sun do the job. Check the viscosity level. Neither too thick nor too liquid.

The first man who brought (we don’t know from where) seeds to Lebanon was Kablan Isa Al Khoure.

Drugs have a long tradition in the Beqaa Valley, from the days of the Roman Empire until today cultivators and tribal drug lords working with militias built up a thriving cannabis trade. During the Lebanese Civil War, cannabis cultivation was a major source of income in the Beqaa valley, where most of the country’s hashish and opium was produced, a multibillion-dollar industry fueling the agricultural sector as well as political factions and organized crime.The trade collapsed during the worldwide crackdown on narcotics led by the United States in the early 1990s. Under pressure from the U.S. State Department, the occupying Syrian Army plowed up the Beqaa’s cannabis fields and sprayed them with poison.

Due to increasing political unrest that weakened the central Lebanese government during 2006 Lebanon War and 2007 (Opposition boycott of the government) and due to the lack of viable alternatives (U.N. promises of irrigation projects and alternative crop subsidies that never materialised) drug cultivation and production have significantly increased, but limited to a part of the valley where the rule of tribal law protecting armed families is still strong.