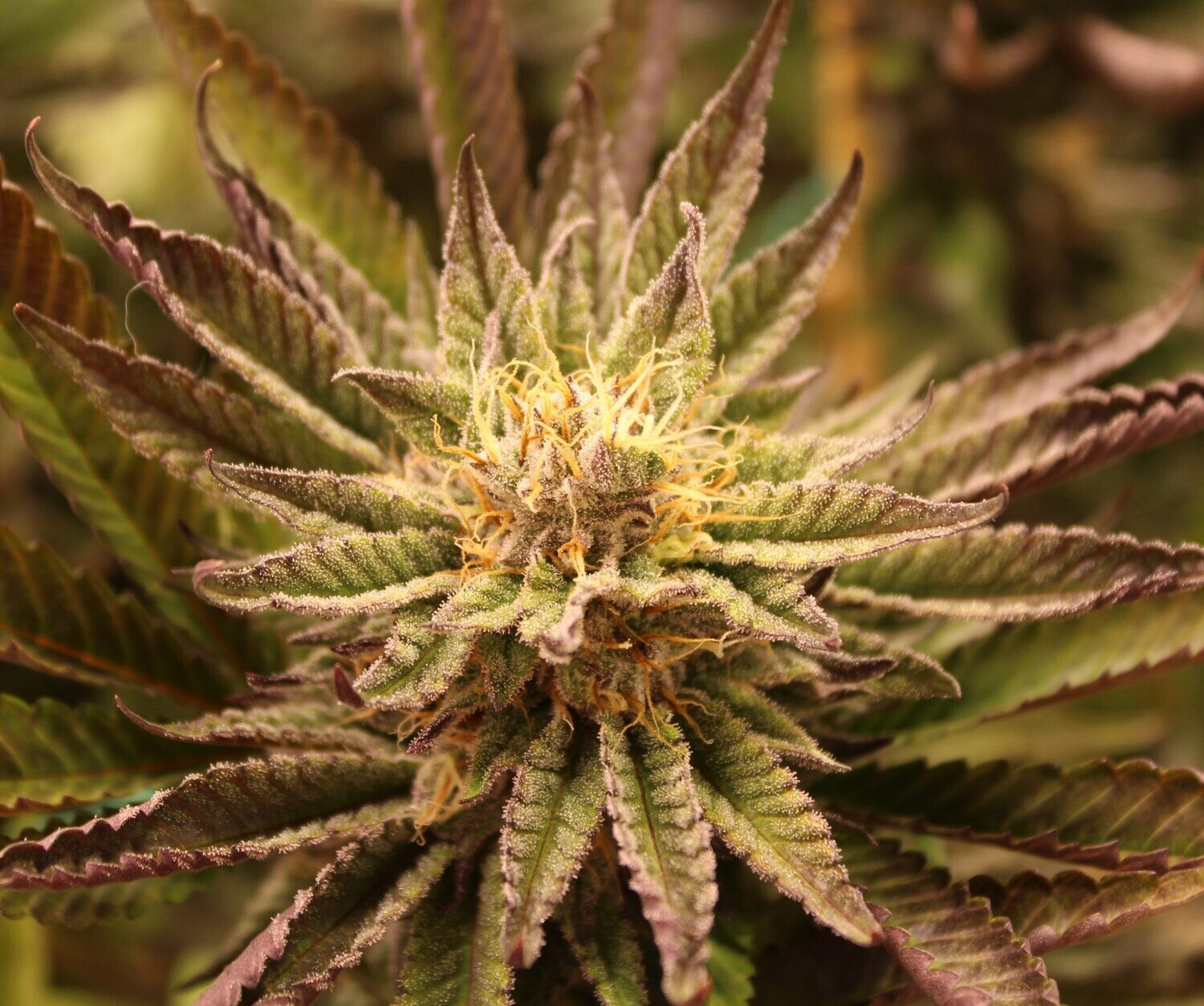 Mother: Dragons Blood Hashplant is an incredibly special plant bred by Bodhi. It’s special because there are certain phenotypes that will bleed red sap that looks just like blood (or raspberry juice)! We were on the hunt for these seeds for years, but they were sold out worldwide. Sometime later we had an opportunity to trade with somebody who had some and sure enough after planting 4 seeds we found one that bled red!! It’s incredible to see the bloody red sap exude from the plant when the tops are pinched off! During pre-flower pruning the scene can turn into a massacre lol.

Dragons Blood Hashplant has a yield that is average or slightly less than average, but the plant makes up for it in other ways, with its resin coat, unique terpentine aroma profile, and its profound high it imparts on the user.

‘Father’: Purple Pineapple Express #4 is one of our favorite plants, and she just so happens to be one of the first crosses we ever made! Nearly 10 years ago, we used a beautiful Pineapple Express female and crossed her to a special non-serrate leaf Huckleberry Hound male. Each of the Purple Pineapple Express phenotypes were extremely nice in appearance, all expressing purple flowers with huge, fat buds and exceptional yields, but we decided to keep the #4 phenotype because of her sturdy stature, fantastic bud production, her insanely resinous pewter-purple flowers, and her stellar high. We grew PPE #4 for many years until we accidentally lost her for a while, only to receive her back from a HUGE clone facility in California that we had gifted her to previously. And she came back with good news– Customers absolutely loved growing her indoors and out in California and those same happy customers found her to be 100% resistant to powdery mildew! To us, this is one of the most special and important traits a cannabis plant can have, and is one more reason why we love PPE4 so much! This resistance to mildew was our primary motivation in using her as the pollen donor in this new fem line. She is so intolerant to powdery mildew that every plant in the garden can be completely covered in it and this plant, sitting right next to them and touching them, will NOT get it, and will stay 100% unaffected. While we imagine many of the plants in this line will show great resistance to powdery mildew, we did not purposely expose our plants to it during our trials, so we can’t speak to exact percentages or ratios of resistance, but we can say that we had zero instances of powdery mildew in our flower garden during the most critical, wet months of the cold-weather season.Generally speaking, plants from our Purple Pineapple Express line have tons of resin and color– most of the progeny produce dark buds ranging from light pink to deep, dark purple, with a couple standard green plants here and there. The fan leaves themselves are highly colorful, turning various shades of purple towards the middle to end of flower. Plants can also showcase a unique trait where the leaves are green on top and purple on the undersides. This certainly makes for a colorful garden! We also found that plants produce exceptionally nice flower structures that are large, fat, and rounded on top, just like we want them.

If one searches ‘Purple Pineapple Express’ on Google the first 3 pages of results show grow reports, smoke reports, PPE buds, concentrates, and clones for sale, which just goes to show how popular this plant has become over the years!

Sangue Amore seed plants are the tallest in this seed line and for the most part are a perfect combination of both parents with lanky branches of an average flower-set. We’d argue that Sangue Amore plants are an improvement over Dragons Blood Hashplant because of the increased yield and the increased resin output. The leaves are more green than they are purple, while the buds are equally green and purple, which comes on during late flower. Plants may show some powdery mildew resistance too because of the PPE4 father, but I think the question most are looking for here is, “Do Sangue Amore plants bleed red!?” They sure do! We found about 25% will show this spectacular trait. We will keep working the blood line, but this is great chance to experience it yourself!