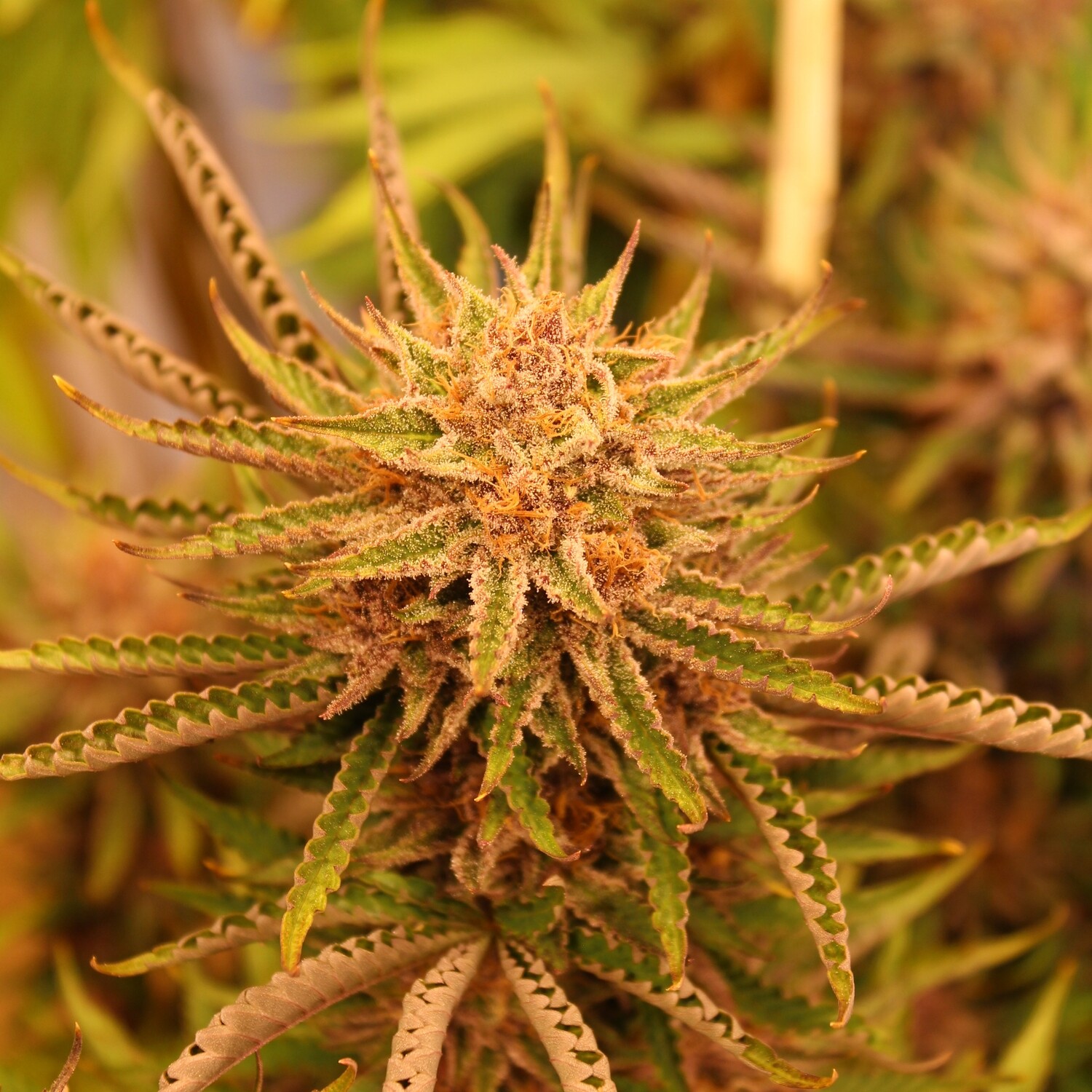 Mother: Lemon Cheesecake is easily one of our favorite plants of all time and sits somewhere in our top 5 list. We don’t have any plans of parting with her anytime soon, or maybe ever, considering we are one of the only ones with her.

There is a backstory to how we received this plant and why we may be one of the rare gardeners that have her: Many years ago before any recreational states were online, we briefly worked with one of the largest medical marijuana clone facilities in the PNW. They had a ‘legal’ physical brick and mortar storefront with hundreds of clones for sale and they REALLY wanted our Black Cherry Soda plant. After a year or two of saying no, we finally said yes. The catch was that we could personally come pick out any of their many strains for this one we had. This place had a MASSIVE amount of varieties…. holding over 200 huge mother plants in one space. Needless to say, there was a lot to choose from! (This is when we picked up a few of our keepers that we’ve bred with throughout the years.)

One variety that stood out to us was ‘Pam’s Lemon Cheesecake’. It was a CBD variety, and since we were looking for a unique CBD plant, we grabbed her, plus a bunch of others. We grew it out and sure enough it smelled just like Lemon Cheesecake, only better, with some added floral notes, as well as some bubblegum in there too. When we later had the dried flower sample tested for cannabinoid potency it came back at 17% THC (with the old testing standards before they increased them by 27%), and had less than 1% CBD. So of course after hearing those numbers we knew it was definitely not a high-CBD strain after all. We were somewhat perplexed with the test results, but were still overly pleased with the plant itself and the finished product.

Somehow the plant had been mislabeled or misrepresented, so we decided to drop the ‘Pams’ in the name and just call it ‘Lemon Cheesecake’ (and the genetics ‘unknown’) because there was no denying the incredible aroma it had! It was just too fitting to change the name to anything else. Typically, if we are uncertain about genetics or can’t confirm a strains true name or origin, then we would pass on it just because there are so many other easily verified cannabis varieties to work with, but not this one, nope. This one was too unique. The heavenly aroma, the somewhat loose, wide to narrow conical bud structure, and the huge, deeply-serrated leaves… we had to keep it. And I’m glad we did because we’ve had her for nearly a decade now. She happens to be one of the parents of the strain that first put us on the map– Pink LemonAid (#2). PL2 definitely got her insane trichome coverage from her mother, Lemon Cheesecake, and just by chance we’ve not offered another seed variety that hails from her name, until now!

There is a suspicion about Lemon Cheesecake that we have though– Many times we’ve wondered if she might possibly, perhaps be the Original 90’s Bubblegum from Serious Seeds? The one that everyone looks for and can never find. We know because we’ve tried ourselves… we’ve tried to find out what this plant is– we’ve ordered Lemon Cake seeds from Europe and grew them out. We bought Indiana Bubblegum seeds (folks think this is THE Bubblegum to look for, but we would disagree) and grew them out… We even grew out a new pack of Serious Seeds Bubblegum seeds (2018) from Europe… and all three crosses were highly disappointing and none of them really smelled like Bubblegum at all, or Lemon Cheesecake for that matter. They didn’t come close to standing parallel to what this plant is… So why do we think this could be the Original 90’s Serious Seeds Bubblegum? 1.) Because we’ve seen photos of the Original Bubblegum flowers which have a very distinct, unique look, which looks just like our Lemon Cheesecake here. 2.) Although it smells like lemon cheesecake, it also smells like bubblegum. 3.) It’s a special plant and we’ve never seen or smelled another like it even to this day, which really makes us wonder…

Does this mean our Lemon Cheesecake is The Old School bubblegum? No, but it could be. We know there are folks out there that have grown the Original and may know more about it than we do, so we offer this information as an opportunity to learn more about what we might have.

Regardless of its name, this plant is entirely unique and its contributions to this cross cannot be understated.

‘Father’: Purple Pineapple Express #4 is one of our favorite plants, and she just so happens to be one of the first crosses we ever made! Nearly 10 years ago, we used a beautiful Pineapple Express female and crossed her to a special non-serrate leaf Huckleberry Hound male. Each of the Purple Pineapple Express phenotypes were extremely nice in appearance, all expressing purple flowers with huge, fat buds and exceptional yields, but we decided to keep the #4 phenotype because of her sturdy stature, fantastic bud production, her insanely resinous pewter-purple flowers, and her stellar high. We grew PPE #4 for many years until we accidentally lost her for a while, only to receive her back from a HUGE clone facility in California that we had gifted her to previously. And she came back with good news– Customers absolutely loved growing her indoors and out in California and those same happy customers found her to be 100% resistant to powdery mildew! To us, this is one of the most special and important traits a cannabis plant can have, and is one more reason why we love PPE4 so much! This resistance to mildew was our primary motivation in using her as the pollen donor in this new fem line. She is so intolerant to powdery mildew that every plant in the garden can be completely covered in it and this plant, sitting right next to them and touching them, will NOT get it, and will stay 100% unaffected. While we imagine many of the plants in this line will show great resistance to powdery mildew, we did not purposely expose our plants to it during our trials, so we can’t speak to exact percentages or ratios of resistance, but we can say that we had zero instances of powdery mildew in our flower garden during the most critical, wet months of the cold-weather season.Generally speaking, plants from our Purple Pineapple Express line have tons of resin and color– most of the progeny produce dark buds ranging from light pink to deep, dark purple, with a couple standard green plants here and there. The fan leaves themselves are highly colorful, turning various shades of purple towards the middle to end of flower. Plants can also showcase a unique trait where the leaves are green on top and purple on the undersides. This certainly makes for a colorful garden! We also found that plants produce exceptionally nice flower structures that are large, fat, and rounded on top, just like we want them.

If one searches ‘Purple Pineapple Express’ on Google the first 3 pages of results show grow reports, smoke reports, PPE buds, concentrates, and clones for sale, which just goes to show how popular this plant has become over the years!

Scentuous seeds were named after the sensuous aroma that the beautiful blooms exude. It’s a complex scent with a floral base, with notes of pastries, berry fruits, and sugary candy. Most plants show pink, red, and purple colors throughout, showing a nice mix of both parents. But our favorites are the ones that look like the mother parent, Lemon Cheesecake ,that have the special look to the flower buds and the similar, sensuous aroma profile from the maternal parent. The plants are mostly short, stout, and bushy with a very healthy yield. The high is fantastic too! It’s uplifting and euphoric and inspires creativity. A couple phenotypes have a rather hard come down after the initial uplifting high, while the others are pleasant and beg to be smoked more, which we certainly oblige! This is one of our favorite daytime smokes without question.