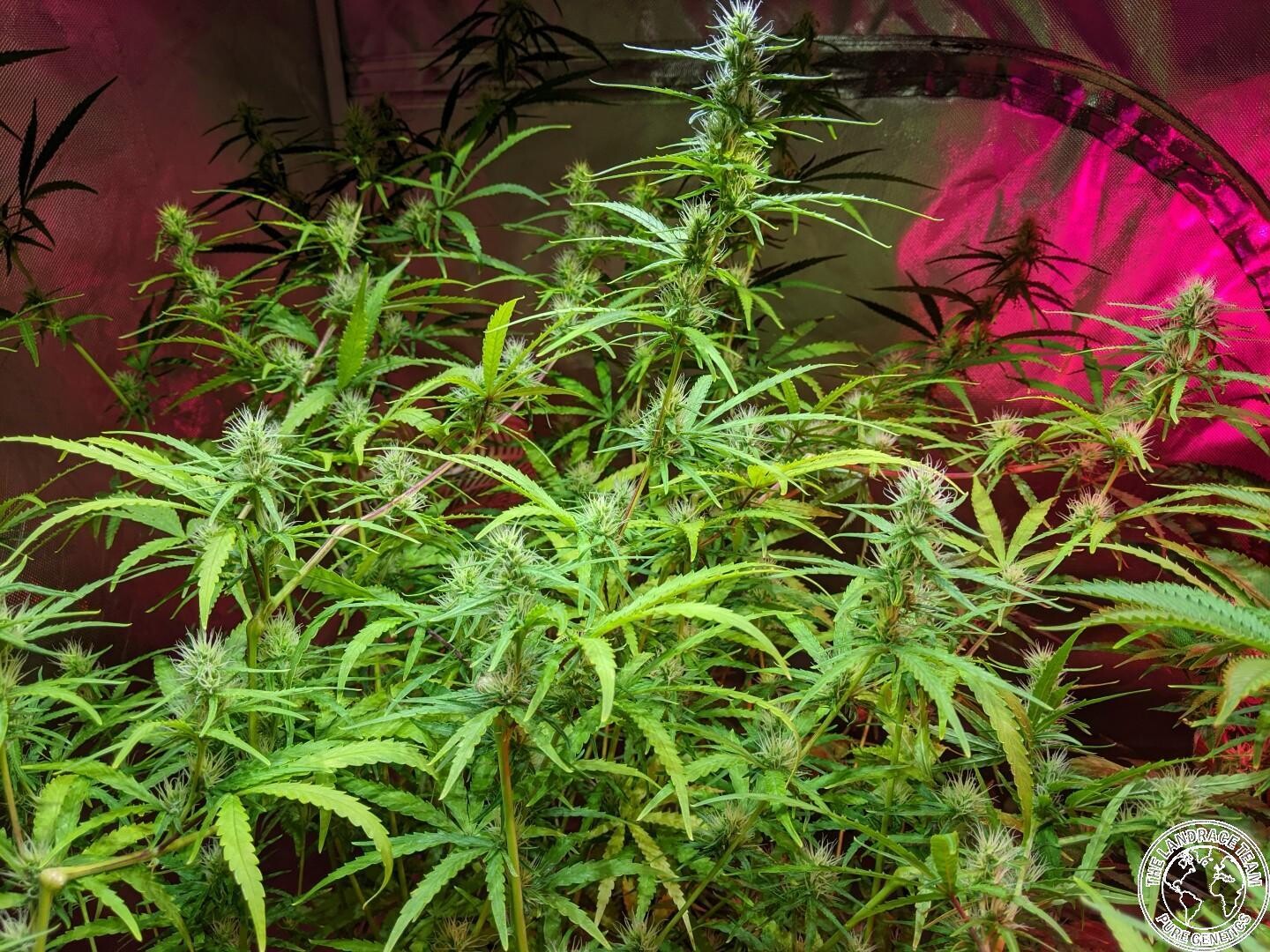 The seeds of this plant were obtained in the outskirts of a town in the Central Province in Sri Lanka, in February 1977 at an elevation 350 metres (1100 feet). The current iteration is the latest IBL (inbred line) of the original plants.

There are two flower types present in these genes, one which is fluffy and one which is relatively dense. Growth is very similar for both, and plants will get huge in vegativatve stage unless flowered early or pruned.

The farmers who provided the seeds had been growing this plant since before WWII, and apparently had a ready market at the British naval base at Trincomalee until its closing when the British left the island. This was what the farmer related, because by the 1970’s, the government had become very severe against cannabis on the island.

The area around where these plants come from is rich in farming of all kinds imaginable; rice, rubber, tea, vegatables, and most famous, exotic spices, particularly cinnamon, black pepper and saffron.
According to a local guide native to this province, cannabis came with foreigners lost in the mists of 18th, 19th century invasions of the island. Dutch, Portuguese English and labour from throughout the sub-continent and Africa brought their habits, cultures and plants with them and Sri Lanka, the ‘Resplendent Isle’ was as fertile and productive as could be found.

Initially, the British produced coffee as a primary cash crop, but due to an awful blight, tea was introduced and flourished thereafter. There are many historical layers to Sri Lanka’s agricultural history, special in its unusual story and diversity.

Sri Lanka is a pretty high THC plant, definitely sativa, but no racing anxiety. Good daytime early evening social, happy smoke. The effects are clear, up high, making you remain productive.
Plants from this line will do well in California,Texas,Florida, and the deep south outdoors. In the north, greenhouse growing would be a good choice. Indoors, expect 12-14 weeks flower time.
LED and soil organics will produce the most desirable expressions from this line, or natural sunshine. Indoor, 12-14 weeks full flower. Smaller seedlings should be flowered at small size,8″- 10″, in order to be managed for size in flower. Many side branches and long colas are the norm.

The effect you will get from the Sri Lankan plants are sativa all the way: head uplift, energy giving, not anxious or paranoid in any way. It’s “mild” enough for experienced smokers to puff all day, yet potent enough to be nicely blitzed for a couple of hours on a few good tokes.

Planting season for the main crops are down in November/December. Second planting occur in April/May, but this is second season. Shorter, smaller harvest. The smells are sweet and earthy, depends when they are harvested, early or a time later in maturity. In traditional use, young and middle flower plants are used for medicines and palliatives. Certain farmers grow the ” Kansa “, or ganja, for mature buds intended for smoking. The aromas are sweet, minty, spicy/hashy.

The flavours are a mix of sweet and coffee/vanilla if cured properly. Sometimes a minty/gas flavour arises, especially from mature tops. Resin is minimal compared to modern hybrids, but plentiful for this sort of sativa. Rubs of near mature flowers and nearby stems smell spicy, sweet, even pepper/licorice scents.