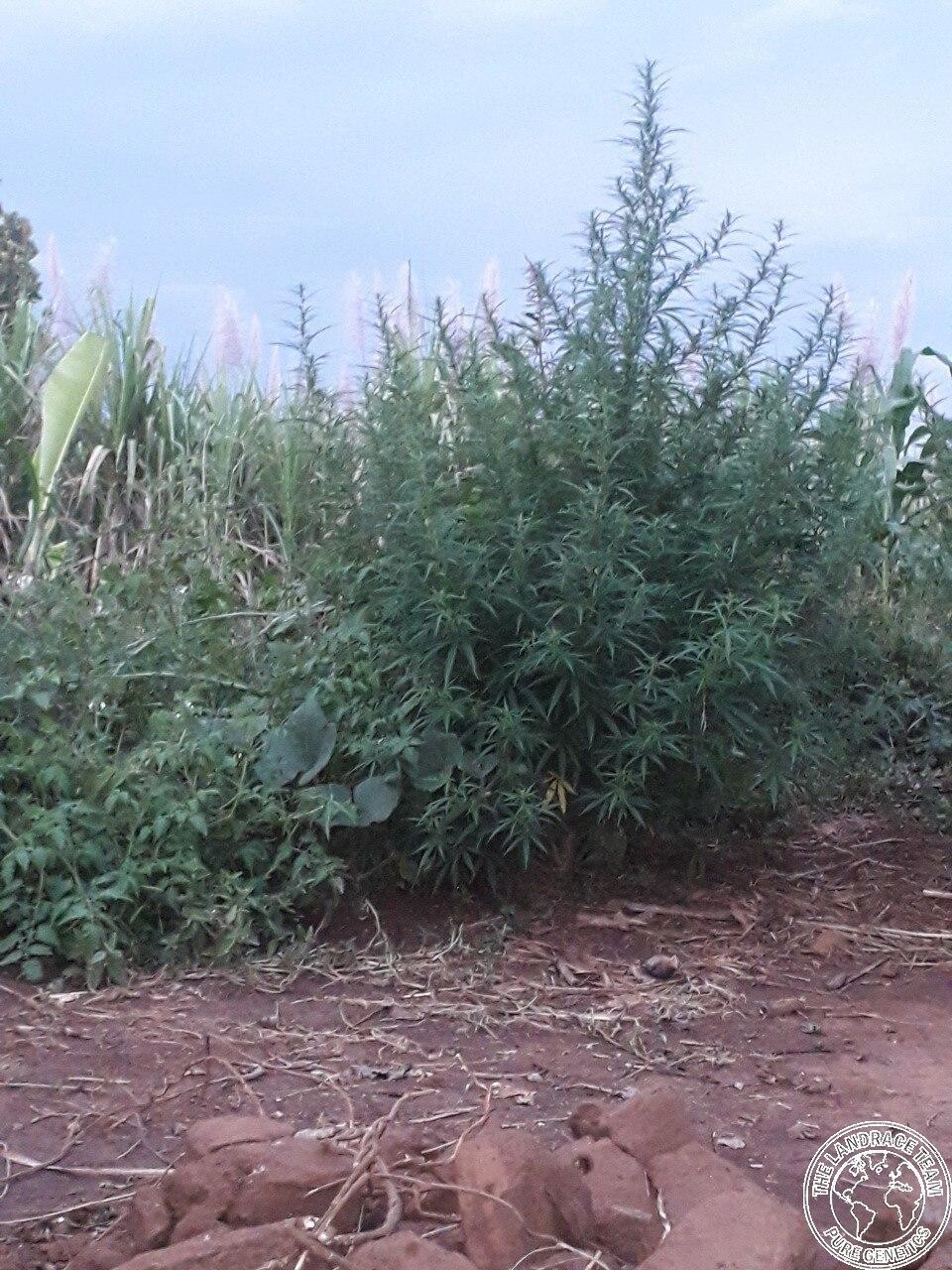 “Mamba” means snake. This plant has been nicknamed Snake Sting. Black because it shows black stems and black branches. The snake sting because it also has a venomous and fast high that kicks in almost immediately after the first toke and because it has a nose bending smell.

These plants grow mostly short and wide and as the colas pack up weight they weigh tha plants down and they grow wide and bushy. The other phenotypes grow a huge and long main cola with sparser side branches. The buds are generally thin, sticky and gluey but long and with lots of thin leaves that look like fox tails and towards the last weeks of flowering the plants become frostier and denser.

During the vegetative stage the leaves are very dark green and tend to become light green, almost lime green as flowering stage kicks in. They can reach 3 metres in height. The sowing season happens all year due to the area being a natural 12/12. Farmers tend to grow all year round but most prefer to grow with the rainy season (September to November the long rainy season and short rains from April to May) so they can camouflage their crop well in between the maize plants. From seed to harvest the plants take up to 20 weeks (or even longer) with only 4 of those spent on vegetative. The rest is for flowering. Some may take 16 weeks or longer to complete flowering and bring out their full potential. So most farmers can choose one of the two seasons, from October to Early March or from January to early June. Those who are able to water manually grow anytime of the year.

The aromas these plants emanate are of sour fruits with a dominant kerosene type of smell.
The high is felt almost immediately which start with some giggles, light headedness that turns into cycles of deep concentration spans that are almost trance like with some reported hallucinations from those who are not used to this type of strain. It helps to increase focus and concentration and be creative if smoked during an activity and the high can last for hours. It makes you feel like floating almost like out of your body, very intense ad long lasting. It will leave you very hungry. This is the most potent phenotype. Almost everywhere across Uganda everyone grows it. Same structure, same colour, the only difference with this one is the nose bending smell hence the name “Mamba” (snake). The most potent one is rough on the nose. It has almost a venomous and fast kick hence the name “Mamba” (snake).

Farmers grow the plants outdoor. They mix local cow manure into the soil then they inter crop it with maize, coffee or cassava in a random fashion. Due to the police raids on grow areas many farmers have moved plantations to other places where it’s very hard for the police and informers to access.

The strain has existed for years within Buganda tribes and has been, in the past, cultivated by Shamans and herbalists before an attempt to commercialize it.
The ability of the strain to induce a trance-like state has seen it being included in ancestral worship where it is mixed with wild sage and used to purify homes and other properties. It is also a requirement in the Buganda culture that whoever is purifying, must first summon the ancestral spirits and then guide them by mixing the “holy herb” with tobacco and smoked while making libations using a traditional smoking pipe which is now displayed at the Kampala museum. The practitioner would transcend into the Spiritual realm.
As a medicine the strain is used to treat asthma, diabetes and stimulate appetite in tea form and cooked with sacrificial meats to treat insomnia and mental disorders. Furthermore fresh leaves are added now and then to the diet of cows, goats and pigs to keep their vitality levels up.